Restorative Justice: Why Do We Need It?

Stay up to date

Back to main Blog

There is a group of people who need us to end mass incarceration more than almost any other: crime survivors.

The idea may sound incongruous. If it does, it is largely because we have a myth in this country that we incarcerate people who commit violence because that’s what victims want.

Underlying that myth is a belief that victims are monolithic group, when in fact they are far more diverse than the public discourse reflects. A young man of color is more than ten times as likely as I am, as a white woman, to be harmed by violence, and yet most of the voices that have informed our understanding of what victims want belong to people like me. What’s more, survivors of all backgrounds often want a far wider array of solutions than those currently on offer in our system. The problem is, we rarely listen to victims, and when we do, we rarely do what they ask.

A decade ago, I began asking: what would it look like to build a criminal justice system where the greatest possible portion of crime survivors experienced justice and safety when they were harmed?

I don’t think that’s a radical question. It’s not a leftist question or an anti-law enforcement one. But when I asked it honestly—and asked it of survivors—one of the most consistent responses I heard was not a demand for longer punishments, not even a demand for more police—it was a demand for more alternatives to incarceration, and for restorative justice in particular.

Survivors need certain things to heal: to ask why, to have their questions answered, to express their pain and have it acknowledged (ideally by the person who harmed them), to have their safety assured, and to believe no one else will go through the pain they experienced. Our criminal justice system as we know it fails to deliver virtually all of that—survivors have no access to the people who harmed them to face them and get the answers and recognition they deserve, the system fails to address the underlying conditions that made them unsafe in the first place, and as recidivism rates prove time and time again, incarceration fails miserably to deliver any of us the safety we deserve. In Common Justice’s experience working with survivors, we have learned what people doing this work across the country also know: that survivors want the people who harmed them held meaningfully accountable, and for many, the criminal justice system as we know it—and incarceration in particular—can be inadequate or counterproductive to that end. When we rely exclusively on incarceration to address serious crime, it is crime survivors who lose out. 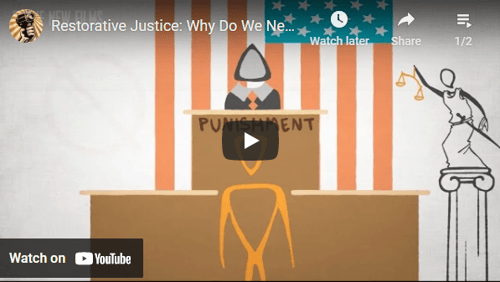 There is, however, a process that gives many survivors the things they need to heal. It’s called restorative justice, and it is hundreds, if not thousands, of years old and is practiced in various forms across the country—including in communities, in schools, and as alternatives to court processes. Restorative justice brings together those directly impacted by an act of harm to address the impact of the crime, hold the person who did it accountable, and make things as right as possible for those harmed. It gives survivors an opportunity to be heard, to have their pain recognized, to shape the outcome of what happened to them, and to develop a sense of safety—all things that are proven to increase their wellbeing in the short and long term, including decreasing systems of post-traumatic stress. Most survivors offered restorative justice options choose them, and an extremely high portion (90% overall) report being more satisfied with those processes than with standard court proceedings.

Some survivors certainly do want punishment. But what nearly all survivors want is real accountability on the part of the people who hurt them. And punishment and accountability are not the same thing. Punishment is passive—it means someone else doing something to you. Accountability is different. It requires five key elements: (1) acknowledging one’s responsibility for one’s actions, (2) acknowledging the impact of one’s actions on others, (3) expressing genuine remorse, (4) taking actions to repair the harm to the degree possible, and (5) no longer committing similar harm. Unlike punishment, accountability is not passive. Far from it. It is active, rigorous, and demands the full humanity of people who have committed harm. It is aligned with what crime survivors need to heal. And the evidence shows restorative justice accountability processes reduce recidivism and keep people safer.

If we want to make right on our national promise to crime survivors, we can no longer carry out our commitment to draconian punishment in their names. That doesn’t mean ignoring the voices of survivors who do support incarceration. But it does mean no longer ignoring the voices of survivors who do not—and who want something else in its place. Survivors deserve the best options we can possibly provide them, and so do the communities that suffer when incarceration fails to deliver safety. We owe it to them to develop options. And given the great promise of restorative justice, we can no longer pretend we don’t know what else to do.

Get latest articles directly in your inbox, stay up to date